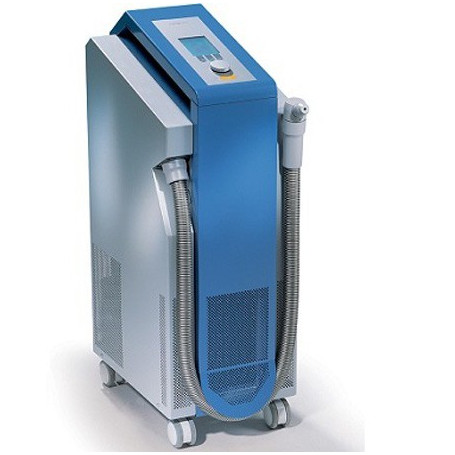 The mobile Uniphy Cryoflow 1000 cryotherapy device is suitable for cooling treatment using air from the surrounding environment. It works with adjustable airflow from 100 to 1000 liters / minute, with the capability of adjusting airflow in up to 10 steps during a treatment session.

By extracting air from the surrounding environment and cooling it, the Uniphy Cryoflow 1000 cryotherapy device generates controlled dosages of cold air. It is important to know that no additional moisture is used, which allows reaching lower temperatures (more effective treatment while reaching thermal shock more rapidly).

The temperature inside the cryotherapy device reaches down to -32ºC and then blown out through the treatment hose onto the area to be treated. The patient is not complaining about pain caused by this temperature.

Uniphy Cryoflow 1000 cryotherapy device has a double-walled, flexible hose (1.60 m in length) with various different attachable nozzles and a head that can be rotated through 360°.

The possibilities for application of the Cryoflow are enormous. It is much more powerful than the majority of systems in use and its simple control panel is very user-friendly.

This site uses cookies. By continuing to browse the site you are agreeing to our use of cookies. Learn more