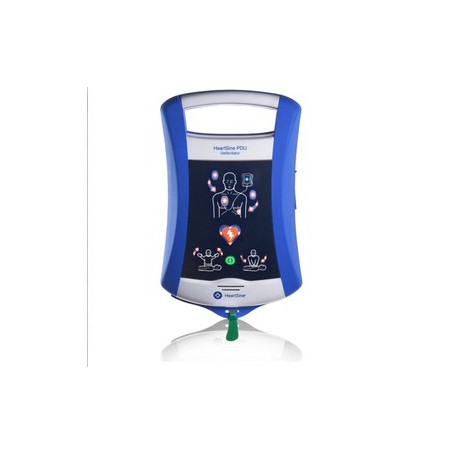 With statistical data indicating that more than 80 percent of deaths due to Sudden Cardiac Arrest (SCA) occur at home, it becomes increasingly important to improve accessibility to lifesaving technology.

The HeartSine® Personal Defibrillation Unit PDU 400 has been designed to address the criticality of Sudden Cardiac Arrest; at the same time, the user interface has been tailored for the lay rescuer with both audio and visual prompts.

It has an effective cost and a single-use technology. Contains audio and visual prompts which guide the user step-by-step through the rescue process. It has a 5-year warranty including integrated battery and electrodes. It is suitable for adults and children from eight years old, weighing more than 25kg (55 lbs.). It also has an automatic self-check.

The innovative, single-use technology within the PDU 400 makes it an affordable option for home use.

It is easy to use with audio and visual prompts to guide the user step-by-step through the rescue process. It comes complete with integrated electrodes and a battery with a 5-year shelf life – everything you need to save the life of a friend or family member in one unit.

The PDU 400 is a single-use automated external defibrillator (AED) that analyses the heart rhythm and delivers an electrical shock to victims of Sudden Cardiac Arrest (SCA) in order to restore the heart to normal rhythm.

You have only to turn on the PDU 400 and hear the clear and calm instructions guide the rescuer through visual and audio prompts. Also the system guides user through pad application to shock delivery, if required.

It is easy-to-use, lifesaving technology available for use where it’s needed most.

The PDU 400 delivers a low-energy biphasic waveform. This waveform is automatically tailored to the patient impedance such that the same energy is delivered irrespective of that impedance.

It is known that the lower the energy required for conversion from Ventricular Fibrillation to Normal Sinus Rhythm, the less the damage to the tissue of the heart and the less likely the patient is to suffer repeat attacks, which formerly might have ensued from defibrillation. However, there is a threshold below which the energy might not be effective.

HeartSine has conducted extensive research in an attempt to both increase efficacy and decrease delivered energy. In clinical trials, it has been shown that using a “low-tilt” waveform increases the efficacy of the therapeutic shock and allows a reduction of delivered energy from more than 150 Joules to 120 Joules.

A low-tilt waveform is one in which the difference in voltage between the start and end of both phases is on the order of 20 percent (compared to the previous differences of some 50 percent or greater).

This pioneering research was conducted by HeartSine in association with the Royal Victoria Hospital, Belfast.

It has an effective cost and a single-use technology. Audio and visual prompts guide the user step-by-step through the rescue process. Has a 5-year warranty including integrated battery and electrodes. It is suitable for adults and children from eight years old weighing more than 25kg (55 lbs.). With an automatic self-check and an IP44 protection against dust and water ingress. It has am event data saved on a standard SD memory card, allowing it to be removed and given to a physician as required and it is also CE marked.

This site uses cookies. By continuing to browse the site you are agreeing to our use of cookies. Learn more